The team at Shark Experience have been specialising in Shark cage diving and sightseeing tours in the Foveaux Strait out of Bluff, for the last nine years.

We are purely a business that offers the opportunity to clients to interact with the natural world.

Our crew are committed to providing education, protection and the promotion of our special marine environment. I’m Mike and I have been diving this region for nearly 30 years, having been born and bred down here. I have an intimate knowledge of this region and can take you to some of the best sights that Southland seas have to offer. I had a couple of Great Whites approach me on a dive a number of years ago and ever since then I've had a fascination with these awesome creatures. 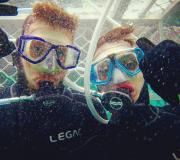 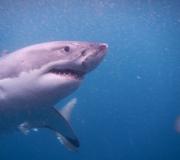 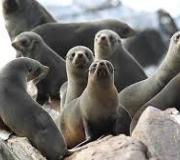 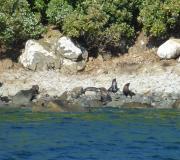 As one of the world's hotspots for great white sharks, this protection is an important step towards reducing threats to this globally vulnerable species, which is in decline throughout the world.

The Department of Conservation is currently working alongside New Zealand and international scientists to learn more about this little-known species in the hope that this information will further aid conservation efforts.

White sharks are between 1-1.5 m long and 21-32 kg at birth. Females grow to at least 6.4 metres, while the males are no lightweights at 5.5 metres maximum length. Several large females estimated to be between 6.7 and 7 metres long have been landed, and while it is difficult to weigh such large animals two reportedly tipped the scales at a massive two and a half tonnes!

Great white sharks can reach great speeds when in pursuit of prey and leap clear of the water. They also cover vast distances of ocean. A shark tagged in New Zealand travelled over 1000 kilometres in just one week.

Common sense dictates that any large shark should be treated with respect. As a general rule any shark over 1.8 m long, regardless of species, should be treated as potentially dangerous. Fortunately, shark attack, particularly one involving serious injury is very rare in New Zealand.

The Department of Conservation administers protection under the Wildlife Act 1953, and is the New Zealand CITES authority.

Your shark experience relies on the cooperation of an unpredictable, magnificent wild animal.  None of the animals we deal with are trained.   When dealing with any natural event or animal, there are no guarantees.  Shark Experience follows strict  industry -imposed guidelines when dealing with sharks and our staff are trained to adhere to these guidelines.  Our crew will do everything it can to provide you with a Shark Experience within these guidelines.

Valid for Shark Cage Dive bookings made between - 1 October 2012 to 1st June 2020 In the rare event that you do not get to see a shark, as a Shark Cage Diver and Sightseer, you will be offered a Return Trip Voucher.   This voucher is valid for 365 days and is not transferable to any other person.

Sightseeing passengers will receive one single Return Trip Voucher only.

Return Trip Vouchers cannot be transferred into another person’s name

Vouchers are not redeemable for cash.

Vouchers are valid for a period of 365 days from the date of issue.

Extensions may be granted in extenuating circumstances by contacting our office prior to the voucher expiry.

Due to changes in the interpretation of the Wildlife Act 1953 in 2018, the Big Fish of Foveaux Tour offered by Shark Experience between 6th October 2018 to 11 October 2019,  Shark Experience were not able to offer any guarantee for sightings of particular breeds of sharks.  No refund was offered however we did the very best we could in the event that their desired Big Fish was not sighted on the day of their tour. Thanks for supporting our industry during the tough times.

Please check out our Terms and Conditions to find out more about our Cancellation, Refund and Booking Terms.

Keep up to date